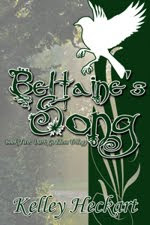 Kelley lives in Arizona with her husband and two dogs. Her lifelong passion for Celtic mythology and storytelling is the inspiration behind her novels featuring fierce warriors, bold women and otherworldly creatures. Armed with a vivid imagination, Kelley spends most of her time daydreaming and crafting tales filled with romance, conflict and magic. She can be found online at www.kelleyheckart.com.

What drew you to writing fantasy? I like writing fantasy because I like to escape from real life into a world with magic, gods and goddesses, shapeshifters, faeries, vampires, werewolves and any other supernatural creatures. Dark Age Scotland/Ireland/Britain and ancient Greece are some of my favorite settings that are very different from modern life. It’s fun to use my imagination and live through my characters in these exotic locations. There is no way I would survive in these places, but it’s fun to pretend.

How long have you been writing and what was your first published piece? I have been writing all my life and have been an avid reader since I was four years old. I started writing song lyrics/poetry, then short fantasy stories and finally—novel length books. My first book, Of Water and Dragons, was published in 2006 with Awe-Struck.

What are you working on now? I am working on another Celtic historical/paranormal romance set in 5th century Scotland when the Picts ruled. My heroine is a Saxon princess and my hero is a Pict druid, but neither of them are what they appear to be. I am fascinated with the mysterious Picts and have wanted to do a story with werewolves, something a little different. The untamed, remote moors and forests of the Picts seem to be the perfect setting for a dark tale.

Blurb for Beltaine’s Song:
For each of them, spring's song has a different meaning.

Aedan and Domelch must battle earthly foes—enemy kings and traitorous allies. For the first time, the arrival of spring heralds the sound of a harsh battle horn as their foes close in. Through all this turmoil, can their love survive?

For their son, Gartnait, spring brings with it the promise of new love and the thrilling sound of the battle horn, putting those he cares about in danger.

Short Excerpt from Beltaine’s Song:
Reaching into her quiver with the quickness of lightning, Domelch fired arrows in rapid succession, sending the arrows into the vulnerable necks of her targets. She aimed at her targets, imagining they were the Levite priests who destroyed her Goddess's temple and cursed her back in Canaan centuries ago. Vengeance roared in her heart, an ever-burning ember. She was Domelch now, but she still possessed memories of Cardea. Only she had a new face for some of her targets now—Riderch's leering face.
It made it easy for her to kill.
All of the warriors had something in their past, something to make them want to kill. She wondered what face Mordag saw as she loosed her arrows, her face a mask of rage. In Domelch's mind, she saw Gemma, sweet, innocent Gemma who knew nothing of darkness. She thought of her argument with Aedan about Gemma's future.
Three short bursts from the battle horn signaled for the archers to stop. Domelch raised her hand. “Archers, halt,” she ordered, her heart still pounding from the exertion of battle. She looked down on the battlefield, her heart flickering with relief and warmth. Aedan's banner fluttered in the sea breeze, victorious. He stood among his companions, his golden crown glimmering with the power of the sun.
Bodies littered the battlefield in a grotesque display. The moans of the dying quieted, an eerie silence cloaked the valley. Camp followers tended those left alive, lifting them into wagons. Loud caws filled the air. Ravens and hooded crows gathered in dark swarms, descending on the fallen warriors. The sound of beaks tearing flesh and hitting bone created a macabre rhythm, a death song. She half expected to see the dead bodies rise and perform a grisly dance. A vulture and raven engaged in a battle of their own, fighting over a piece of flesh that used to belong to a brave warrior.
Aedan's warriors gathered the prisoners, rounding them up like cattle.
“The ravens will be well-fed today,” Mordag commented, her face reflecting no emotion.
“Some of those feeding the ravens are our men.” She stared at Mordag, wondering how Mordag's heart could be blacker than her own heart.
“The smells and sights of death still sicken me,” commented one of the male archers.
“Ye are a weakling,” Mordag snickered, slapping the small man playfully on his shoulder.
Domelch's heart had long ago hardened to death. She had been killing far too long. She thought back to her daughter. Do I want the same for her?

Thanks for interviewing me for your blog.

I love the picture at the top. It's a beautiful scene.