Be Mine, Marshal Part Two by Paty Jager 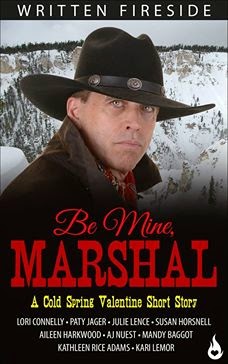 This is part two of a round robin western historical romance Free Read. To read part one go to: Written Fireside and read Part One by Lori Connelly.

Fannie stared at the blood on her hand and Sophie. The dog had escaped the burning barn, but what happened to her after that?
“Let me take a look.” Marshal Reid crouched beside her and Sophie, gently parting the hair on the dog’s neck. “Looks like someone either took a shot at her or sliced her with a knife.” He leaned closer, spreading the hair even more.
Sophie yelped.
Fannie swung her arm. “Don’t hurt her!” She connected with the marshal’s jaw.
“Ow!” He grasped Fannie’s arm, holding it still. “There’s no need to hit me. I’m only trying to decide if she needs stitches.”
Her stomach churned. “Stitches? Will she bleed to death?’ Sophie had been her companion since her parents’ death. All she had for family was Grandfather and Sophie. Her gaze took in the puppies; Sassy, Ringo, Mopsie, Gracie, Buster and Meisha.
“No, but it wouldn’t hurt to get her to town and let the barber take a look at her.” The marshal stood and peered around him.
“What are you looking for and why should the barber take a look at her?” Fannie remained on the floor petting her dog. Staring up at the lawman, she took her time to really look at him. She generally preferred dark-haired men, but there was something about the marshal’s caramel colored curls, pale-green eyes, and the dimple in his chin that caught her attention.
“I’m looking for a something to load them pups in for the trip to town.”
Roger, who she’d completely forgot about, stepped forward. “There’s a crate behind the house that Mrs. Layton dropped off some preserves in.”
“Get it,” Marshal Reid said, removing the dark-green scarf tied around his neck.
“What is that for?” she asked.
Marshal Reid crouched beside her again and wrapped the scarf around Sophie’s neck. “To stop some of the bleeding.”
“Why do you think this was caused by a bullet or knife? She’s had cuts before from running through the bushes and farm equipment.”
“This cut goes across her neck, not the length of her neck, like she’d get crawling through something. And it’s too deep to be caused by accident.” He stood again. “Do you have a buggy or wagon you can haul her to town in?”
Fannie stood. “Yes.”
“Show me which horse to hitch to it.” Marshal Reid used his long legs to carry him toward the barn.
Fannie hitched up her skirts and trotted behind him. “Why did you ask about a barber?” His hair did curl over the collar of his coat, but it seemed an odd question at the moment.
“To stitch up Sophie.”
She grabbed the back of his shearling coat. “Why would a barber stitch up Sophie? We have a doctor in Cold Spring.”
He stopped and pivoted toward her. “You do? I was told Cold Spring needed cleaned up and assumed it was no more than a shanty town.”
“That’s what you get for assuming. Miss Laurel-Anne Hartworth is the doctor.” She wasn’t going to tell him that Miss Laurel-Anne was taught by her daddy and had brought Fannie into the world twenty-two years ago.
“There aren’t any women doctors.” He stared at her like she’d just smeared a cow pie on her face.
“Well don’t tell that to Miss Laurel-Anne.” Fannie hurried ahead of the marshal and straight to the corral where Georgia stood with one hind hoof cocked, her eyes half closed.
Marshal Reid caught up to her. “Buggy or wagon?”
“Georgia pulls the buggy Grandfather purchased years ago for my grandmother. She didn’t like to ride horses.” Fannie moved aside as Marshal Reid caught Georgia.
Fannie walked to the barn and threw the double doors open. She loved driving the buggy. Grandfather insisted on going to church in the buggy once a month when his health allowed. They hadn’t made that trip since the winter weather hit and Grandfather’s breathing worsened.


The marshal led Georgia over to the harness hanging on the wall. “Tell me about the people you believe set fire to the building over the hill.”

You can find Part Three next Tuesday, February 17th at Julie Cerniglia Lence

Other writers adding to the story are:

Email ThisBlogThis!Share to TwitterShare to FacebookShare to Pinterest
Labels: Be Mine, historical western, Marshal, Round Robin, Written Fireside