The Story Behind Murderous Secrets

My newest mystery release, Murderous Secrets: A Shandra Higheagle Mystery, is partially set on the Colville Indian Reservation in Washington state. This book took a bit longer to write having part of the book set in a real area rather than my fictional ski resort of Huckleberry.


There are four districts on the reservation. Inchelium, Omak, Keller, and Nespelem.  The thirteen tribes living on the reservation are: Methow, Okanogan, Arrow Lakes, San Poil, Colville, Nespelem, Chelan, Entiat, Moses-Columbia, Wenatche, Palus, and the Chief Joseph band of the Nez Perce.

With my interest in the Chief Joseph band this is the reason I have my main character, Shandra Higheagle's family part of the Nez Perce at the Colville reservation rather than the Lapwai Reservation in Idaho. The young Chief Joseph, In-mut-too-lat-lat, was buried in the Nespelem area.

It was interesting listening to Carmen, who lives on the reservation in Inchelium and is married to an Arrow Lakes member talk about the way the tribe members interact with one another. It has been over a century since they were roaming the area as nomadic tribes, yet the rivalries and one-up-manship still exists.

This look into the relationships between the tribes helped me to take the story on different twists and directions and will also play into the 6th Shandra Higheagle book, Reservation Revenge. But I'm getting ahead of myself.

In Murderous Secrets, Shandra travels to Nespelem to ask her family about her father's death that has been plaguing her in dreams. While there she is sent to Omak to talk with someone who had a grudge against her father. 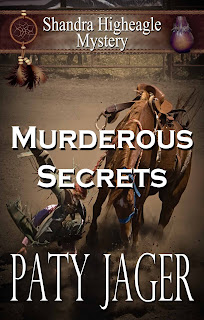 The accident that took her father’s life has always haunted Shandra Higheagle. When her dreams become too real, she knows it’s time to discover the truth. It doesn’t take long to suspect her father had been murdered and that someone is unhappy with her probing.

Detective Ryan Greer knows Shandra well enough to insist he be kept informed of her investigation into the decades old death of her father. When signs implicate her mother, he can’t withhold the information, even though he realizes it could complicate their relationship.