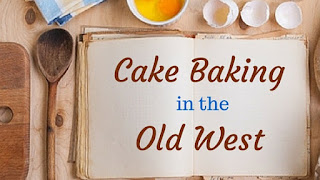 CAKE BAKING IN THE OLD WEST

Our grandmothers and great grandmothers couldn’t simply rip the top off a box of Duncan-Hines Devil’s Food Cake Mix. Baking at the turn of the 19th century was a far sight different than it is today. Many baked on coal- or wood-burning stoves… without temperature dials and judged an oven’s heat by sticking a bare hand in and counting how many seconds they could stand it.

In a day and age when cake recipes often relied solely on eggs to make the batter rise, they whipped egg whites separately from the yolks and carefully folded both highly-beaten components into the batter. When hand-cranked rotary egg beaters came on the market in the mid to late 19th century, the exhausting and time-consuming chore became much easier. 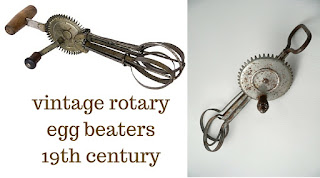 Directions:
1.       On beaten whites of 10 eggs, sift one and a half cups pulverized sugar and a goblet of flour throughout which has been stirred by a heaping teaspoon cream of tartar. Stir very gently. Do not heat it.
2.      Bake in jelly pans.
3.      For cream: take half pint of sweet cream, yolks of 3 eggs, a tablespoon of pulverized sugar, a teaspoon cornstarch, and dissolve starch smoothly with a little milk. Beat yolks and sugar together with this.
4.      Boil the cream and stir these ingredients in as for any cream cake filling, only make a little thicker.
5.      Blanch and chop fine a half pound almonds and stir into the cream. Put together like jelly cake while icing is soft and thick. Stick in a half pound of almonds. Split into two.

I’m an experienced baker, and this recipe confuses me. It’s perhaps more informative than useful for today’s bakers, as it provided a valuable glimpse into history.

In The Drifter’s Proposal, Adaline Whipple runs her family’s bakery business in the wake of her father’s untimely death. She learned every skill of baking (bread, pies, yeast rolls, quick breads, tarts, doughnuts, cookies) from her father. This part of the story came easily for me, as I’m a capable self-taught home-baker. 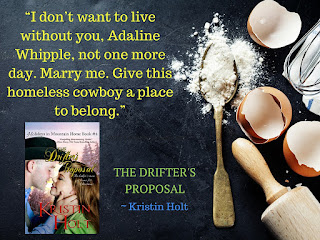 The baker’s man is home for Christmas…

Spinster Adaline Whipple runs the family’s business, Whipple Bakery, since her father’s demise almost four months ago. She’s stunned by a surprise mortgage her father made with a bank in Denver City six months before he died. Now that the loan is sixty days overdue, the big-town banker wants his money. Adaline’s sure the handsome drifter Malloy’s proposal of… marriage?... won’t do her any good. But his mere offer to help feeds the attraction she’s felt for him, and before she knows it, she trusts the one man who can break her heart.

The Drifter’s Proposal is novella #5 of 10 contained within Silver Belles and Stetsons, a Western Romance Christmas Anthology. 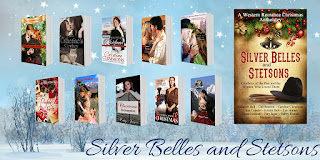 I recall the winter of my first grade year, basking in the heat from our fireplace in Kalamazoo, Michigan.

Dad read aloud Madeline L'Engle's A WRINKLE IN TIME and Mom peeled orange segments for us to enjoy. That was the definitive moment I fell in love with fiction.

I write sweet (wholesome) romances set in the 19th Century American West. I'm newly active in a fantastic Facebook group for authors and readers of Western Historical Romances: Join the fun at www.facebook.com/groups/pioneerhearts.

Please stop by at KristinHolt.com and say hello!

Thank you, Paty, for hosting me today! I so appreciate the opportunity to share a bit of history and my love for baking, along with our anthology SILVER BELLES AND STETSONS.
Warm regards,
Kristin Holt

Kristin, my grandmother didn't trust a rotary egg beater for egg whites and beat them by hand with a toll for that purpose. I'm a big fan of Duncan Hines! Loved your story.

Thank you, Caroline! I love hearing details about friends' grandmothers' methods, recipes, favorite recipes. It lends such authenticity to books set in yesteryear. Thank you for stopping by.

Hi Kristin, that was so interesting. I can remember my Mum and my grandmother having beaters like that, although I had an aunty who made the best cakes ever, and she always only used a spoon to beat the mixture with.

This is so interesting and reminds me of my Mom who married my Dad during the depression and her Mom (my grandmother) who was born in 1882. My mother used the old (I have one too) hand rotary beater that you turned yourself. Then she got fancy and got one of those Kitchen Aide electric beaters, but she made everything from scratch. I can remember she used to sift her own flour (not sure why) with one of those can-looking thingies with the mesh in the bottom. My mother made great divinity and fudge, too, and I've never been able to duplicate her recipes, either. I don't think I have enough patience. It's amazing how hard cooking used to be in the "olden" days. Loved your post!

I always love the old recipes. Pioneer women were some of the best bakers, even though they didn't have all the conveniences we have.

Enjoyed the recipes too!

Cooking and baking took a lot more time in the good old days. I recall my mother sifting flour to make it lighter and beating eggs with a hand-turn beater. Her sisters were great ones for making cakes from scratch and looked down on anyone who used a cake mix. My mom was the pie baker in the bunch. She never used a recipe, just combined the crust ingredients by years of practice, and they turned out sooo tender, almost like French pastry.

Thanks for sharing the yummy recipe and info about ingredients, Kristin!

Great post, Kristin--I could manage the hand mixer, but today's ovens are so much easier than the coal or wood ones. Your book sounds great, too!

Thank you, Lynn, for the kind words. I agree!--can't imagine a wood or coal oven.
Thanks for stopping by,
Kristin

THANK YOU to Margaret, Cait, Hebby, and Lyn--
I so appreciate you sharing your family stories, your memories, your own experiences with old fashioned baking. It was one of those life skills our great-grandmothers had to learn... and so many were incredibly good at it. Thank you for stopping by, sharing thoughtful and personal comments. Much appreciated!
Best,
Kristin Holt