The Shaping of an Amateur Sleuth

The amateur sleuth in my Shandra Higheagle Mystery Series is half Nez Perce. She was raised to hide her Native American heritage when her Nez Perce father died and her mother remarried. However, her paternal grandmother kept in touch, and Shandra spent a summer during her teen-age years with her grandmother on the reservation. Her grandmother said Shandra had powers. When Shandra announced that at home her mother and step-father quickly made her see it was an old woman’s way to making an awkward teenaged girl feel special, nothing more.

As an adult, Shandra visits her grandmother more and is interested in discovering more about her roots. But her grandmother dies, leaving Shandra a note requesting she attend the Seven Drum Ceremony after the funeral.
While in the midst of murders and mystery, Shandra’s grandmother comes to her in dreams showing her clues to the true murderer. While Shandra investigates the dreams and discovers helpful information, she has a hard time believing the dreams and her grandmother’s presence.

This is the information I came up with when I was brainstorming who my amateur sleuth would be in the mystery series I wanted to write. I started with the niggling that I wanted a Native American character. But not being Native American myself, I didn’t know the first thing about being from that heritage. That’s when I came up with the idea of her being kept from those roots. It allowed me to discover Shandra’s heritage as she is discovering it, a piece at a time.

To add a bit more of the “mysticism” or “dreamer” qualities to the Native American element I have her deceased grandmother come to her in dreams. Visions and dreams are instrumental in Native American culture. This was my way of drawing on elements that could be intrinsic to Shandra.

And all amateur sleuths need a person in law enforcement to keep them safe. I gave Shandra handsome Weippe County Detective Ryan Greer. He believes in Shandra’s dreams more than her in the beginning thanks to his Irish mother who taught him to believe in things you can’t see.

I’m enjoying getting to know Shandra and Ryan better with each book I write and having them meet the locals of Huckleberry, Idaho and the unique murders that draw Shandra into the investigations. And I can use the backdrop of the ski resort and the art communities because Shandra is a potter whose works are considered art.

You can now download the first Shandra Higheagle Mystery, Double Duplicity for FREE. 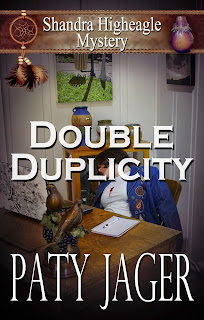 Book one of the Shandra Higheagle Native American Mystery Series
Dreams…Visions…Murder
On the eve of the biggest art event at Huckleberry Mountain Resort, potter Shandra Higheagle finds herself in the middle of a murder investigation. She’s ruled out as a suspect, but now it’s up to her to prove the friend she witnessed fleeing the scene was just as innocent. With help from her recently deceased Nez Perce grandmother, Shandra becomes more confused than ever but just as determined to discover the truth.

Detective Ryan Greer prides himself on solving crimes and refuses to ignore a single clue, including Shandra Higheagle’s visions. While Shandra is hesitant to trust her dreams, Ryan believes in them and believes in her.
Can the pair uncover enough clues for Ryan to make an arrest before one of them becomes the next victim?