I attended an event today called, Tradition Keepers. It was held in the Harney County Community Center. My perception of the event and how it happened were two different things, but I thoroughly enjoyed my trip to town and talking with some of the Keepers of Tradition.

My assumption had been each person would have a time that they talked about the tradition they were keeping alive, but instead, they were set up at tables with samples of their talents. Some worked on the skill while sitting there talking to people and others told about their skills when someone asked them questions.

There was a Taiko drummer (Japanese). The music was rhythmic. She played with fat sticks that she beat on the stretched top of a barrel shaped drum. The different sounds were made by the musician also striking the sticks against the edge and sides of the drum barrel in different places.

A group of youngsters played fiddle music. They were led by a man I would say was in is 80's. He is passing along the art of fiddling to a new generation.

I chatted with my horse trimmer/shoer who is also a silver smith. His work was on display.

There was a husband and wife who trap. They had hides laid out and pamphlets on trapping.

Murph braids mecates, get downs, shu-flies, and cinches with horse hair. He's been around a while and does nice work. He said it's a lost art because many people now think a neoprene cinch is gentler on the horse when in fact it causes more problems. Hair from the mane is used to make the cinches. 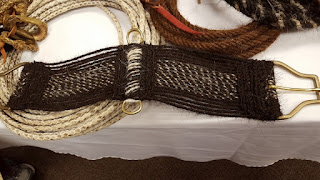 While the cinch felt pokey from the ends of the hair, he claimed that those hairs capture the horse's hair and mats it up on the cinch, making the cinch actually more comfortable and less likely to slip than the cinches made of other materials. He also stated the horse hair cinches don't stretch. They were all winning points to this horse girl.

I also visited with Steve McKay a saddle maker. I've been trying to discover if there was a flank or back cinch on saddle in 1890 for the story I'm currently writing. From all the photos I've studied, I don't see one. He said he wasn't sure but he gave me suggestions of western artists to check out and see if I could determine anything from those. Of course he mentioned Charles Russell and the other person was Eric Morris. He also pointed me back to Murph and suggested he might know. When I questioned him, he said he didn't think they became popular until the 50's and 60's and the rodeo cowboys started using them.

There was a father son duo, Cecil and Emory Coons who are proficient in the art of flintknapping or better known as arrow head chipping. It was interesting talking with them. The father preferred to use the original antler tools to make the arrowheads and the son used a short, fat stick with a copper end. They both had beautiful work, but I think the original antler tool made the arrow heads look more authentic. Cecil said he's fooled a few archeologists with his arrow heads. He travels clear to Canada giving talks and presentations on the art of flintknapping.

Emory works on making art with his flintknapping. They had the various types of obsidian they use for making arrow heads and jewelry. I learned something about flintknapping I didn't know. Emory showed me the grain in the different rocks they had on display. He said you have to chip away at the rock in the direction the grain goes to get the shiny appearance you see in obsidian arrow heads. Visiting with them was fascinating. No doubt a bit of this will come up in a book down the road.

My two favorite tradition keepers I met and visited with were Rena Beers and Sara Barton, women of the Paiute tribe in Harney County. 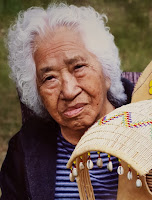 Rena is an elder who makes beautiful traditional cradleboards. She is 98 years

old. The tradition of making cradleboards was passed down by her parents and grandparents. To start the process for making the cradleboard she is given or purchases a hide. The hide is soaked in water for several days. She removes the hair with a draw knife. Rinses the hide and soaks it again, only this time in cow brain for two to three days. This is the process that softens the hide. The next step is wringing out the hide. It is white in color. The hide is then smoked, keeping a close eye on the hide so it doesn't burn. This process gives the hide a warm yellow tone. She gathers willow of uniform size for the bones of the cradle board.  After gathering she strips the bark from the willow.  When the hide is properly tanned and the willow is cut to size she begins building the cradleboard. When the board is finished she adds a decoration of colorful bead work. While her cradleboards look like collector pieces, they are used on the reservation for newborns.
Sara was wonderful to visit with. She gave me insights into more than just her basketry, cradleboards, and regalia. She had a wonderful spirit about her. Pointing out a photo of her regalia dress that she made, she said, "I don't know how to sew, but I wanted to make my regalia dress myself, from the sewing to the decorations. I prayed to the Creator to show me the way and it came to me in a dream, you know, how to do it." This gave me chills because it sounds so much like my character Shandra Higheagle in my mystery series. Not the praying to the Creator, Shandra doesn't believe in her heritage that strongly yet, but the dream fits so well with what I write. She also told me that she wanted the regalia dress not to dance at powwows but to dance for herself. She'd heard that the traditional dance of not just her people but people all over the world was being lost. And it has been passed down that everyone dancing all over the world brings balance. It keeps earth from tipping off it's axis. That is why she dances and teaches her daughter and grandchildren to dance. Dance is joyful and the world needs that joyfulness. 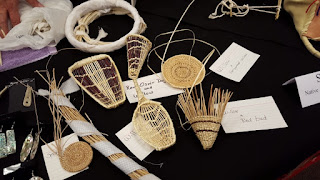 I'm teasing you with some of her work. You can see more and learn about the process of gathering willow and preparing it to make baskets and weave on cradleboards in a blog I'm writing for Sweethearts of the West blog. My post will be up April 24th.

It was a wonderful time spent with Tradition Keepers. May they pass on these traditions to young people and keep the traditions alive!

Incredible! Wish they had something like this near me...

This was fascinating! And you did a great job describing it because I felt I was walking around visiting the tables with you!

Laura, It was the first time I'd been to something like this. The coalition that put it on did a great job getting interesting people and traditions.

Paty,
Such a delightful column. Thanks for sharing your day and these fascinating people. Clearly you were a newspaper woman at sometime, the shots and interview questions were all point on.

Thank you for your comments about the post and being a newspaper woman. I did write freelance articles for papers years ago.