Whew the last couple of Fridays I've had other things happening, so I'm excited to be able to get back to the regular routine. 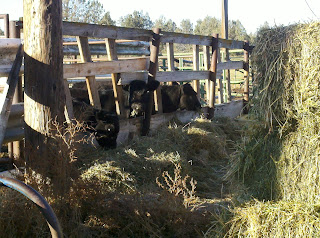 Hubby went to the sale two weeks ago and brought home five 300 pound heifers to feed out through the winter  and if the price is good in the spring we'll resell, if it's low, we'll keep them and breed them. They are all Angus cross so all black. Two area  little bigger than the other three. One of the larger ones had a bit of a runny nose and droopy ears, giving hubby the idea it needed some doctoring. He loaded up a syringe with an antibiotic and one with dewormer and we hiked down to the corral. After rearranging some panels we ran the sickly heifer into the squeeze chute and gave her the vaccinations. The dewormer stings a little so she was rubbing her neck on a corral post after we left her loose. The next day she was looking peppier and this week looks just as bright eyed and hungry as the rest.

With the grass dying and going dormant for the winter, we've had to shuffle the cows and calves from pasture to pasture to get all the grass eaten down and not have to start feeding hay quite yet.  The other day after moving the cattle to the back pasture, we closed the two gates and then hubby wanted to change a hotwire he had running up over a gate. The wire went through a porcelain eye up to far on the post for him to reach. So he bent down and I sat on his shoulders. He slowly raised me up, then stepped up the rise of turf around the pole. It was a bit wobbly, but I managed to get the wire unwound and out of the eye without causing either of us to land on the ground. When he bent down for me to get off his shoulders Boots and Molly the two cow dogs started licking his face. I think they were thanking him for not dropping me. After all I am the one who feeds them! 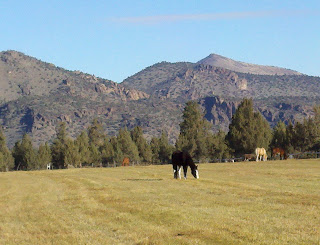 Last I thought I'd leave you with a photo of the horses enjoying their winter pasture.
Posted by Paty Jager at 12:01 AM

Sounds just like how we do things. Still laughing.

Stephanie, you use what you have at the time.

Glad the heifer is bright eyed and bushy tailed. Or clear nosed and perky eared, as the case may be! And what a beautiful shot of the horses and the butte.

Yes, I was walking through the field and had to take the shot.