New Release: Do You Take This Cowboy?

The third installment of my Tumbling Creek Ranch series, The Wrong Cowboy to Love, is now available in the box set - Do You Take This Cowboy?  It's a concept of all the stories having to do with a bride either as the main character of a significant secondary character. 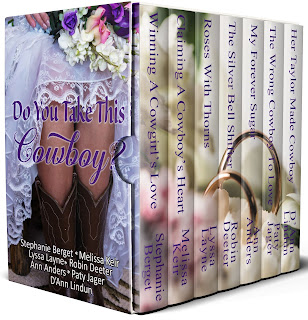 For Better… For Worse…
In Sickness and health…
Falling for a cowboy is easy, but when weddings happen on the ranch, anything can happen and often does! Roping, Fireworks and Magic…Enjoy seven wonderful tales of love and marriage by some best-selling and award-winning Western Contemporary Romance authors. https://www.amazon.com/dp/B07DH69BYZ/

Stephanie Berget Winning A Cowgirl's Love--Money might not buy happiness, but what if it leads to love? Randi Bachmann has two problems after winning an extravagant wedding package from the reality show Your Dream Wedding: She doesn’t have a groom, and she doesn’t want to get married. In desperate need of the $50,000 prize money awarded after 6 months of wedded bliss, she picks the one man she knows will be happy to leave as soon as the term is up, her old boyfriend, Davie Dunbar.

Melissa Keir Claiming a Cowboy’s Heart--Even broken souls deserve a second chance at love….Recognizing each other’s pain, Michelle, an elementary teacher, and Preston, a veterinarian, come together to heal, but fear and misunderstandings send their blossoming relationship into a tailspin. Will they be able to put aside their pain to find the love of a lifetime?

Lyssa Layne Roses With Thorns--Robby and Jordan were destined for one another, soulmates meant to never be separated but their love story didn’t begin at hello. Robby patiently waited for Jordan, trading in trains for horses. Once she turned eighteen, their love story was on the fast track as the two became adults together on the freight train of love as life began to unfold.

Robin Deeter The Silver Bell Shifter--Riley Flowers moves to Wolf Junction, Nebraska, and is intensely drawn to shy, sexy Calvin Lightfoot. Calvin's been burned by lost love before, and he's not willing to chance it again--until Riley enters his life. He wants her for his own, but will she be able to accept the shifter side of him and come to love the man within?

Ann Anders My Forever Sugar--In my wildest dreams I never thought I'd marry a rancher. In my defense, I hadn't met Tucker James yet. He asked. I said yes. Love at first sight is easy. His family… not so much…

Paty Jager The Wrong Cowboy to Love--Ruby Cutter allows her cousin, the bride, to give her a makeover for the upcoming wedding because she wants to catch the attention of her high school crush. But while she’s infatuated with one man, she may be falling for another…

D'Ann Lindun Her Taylor Made Cowboy--As a successful model, Taylor Griffin hated being judged for her looks. Moving behind the lens helps but most men still only see her as arm candy. Waylon Wainwright is smitten with the tall, blonde photographer but can he prove he sees beyond her beauty to the woman underneath?

You don't want to miss out on this great set for $.99 or FREE through Kindle Unlimited.
https://www.amazon.com/dp/B07DH69BYZ/